Reflections on Christmas Past 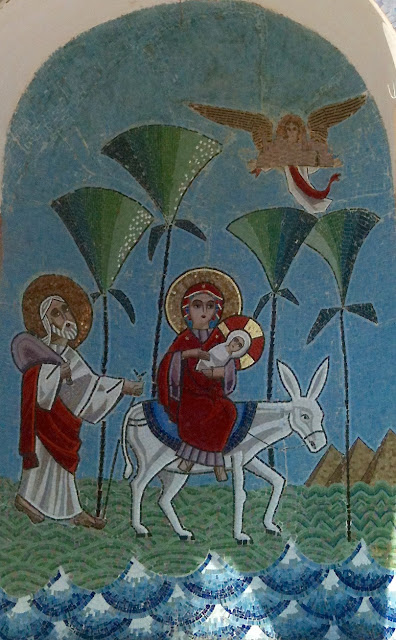 “Bishop, should we cancel Christmas celebrations?”
This rather strange sounding question was addressed to Archbishop Mouneer, the Bishop of Egypt with North Africa and the Horn of Africa (and therefore my ‘boss’) during the week of December 11, by one of the clergy of the diocese. He brought the question to a meeting of the Cairo clergy gathered for a Communion service mid-week. Both the place where the question was asked and the timing of the question are crucial.
On December 11, a bomb was placed in a church on the grounds of the Coptic Orthodox Cathedral in Cairo. The bomb exploded during the Liturgy and more than 24 worshipers were killed. Almost 60 were seriously injured. It is important to note that it is traditional in Coptic churches for women to sit on one side (often with their children) and for men to sit on the other. The bomb was placed in the women’s section. All of the dead were women and children.
The Coptic Church, joined by other Christians in Egypt, responded, yes with grief, but (as usual) without calls for retaliation. Outside of the Coptic Cathedral protesters and mourners shouted. For those who don’t know the language, the sight and sound of thousands of young men chanting loudly and strongly in Arabic might strike fear into the heart of many westerners. But listen more closely ... they are chanting the Nicene Creed. Yes, it was defiance. “We are Christians. We are here. We, too, are willing to give our lives; willing to be martyrs if need be.” But it was non-violent defiance. Here were Christians in the streets of an Islamic country openly and loudly proclaiming their belief and trust in God, Father, Son and Holy Spirit.
For me the response of most Christians in Egypt was remarkable, but not really a surprise. Yes, there is anger. Yes, there is terror. But there is also an amazing trust. And, even more amazing, almost a sense of thanksgiving. I heard Christians saying that they were thankful that God had, once again, counted the Egyptian church worthy of gaining more martyrs, more ‘witnesses’ to the suffering love of God expressed in the suffering of his faithful people. I heard some say how wonderful it was that those who died went to church to have Communion with God, and found themselves continuing that Communion in God’s immediate presence.
But the survivors, the injured and the grieving, still suffer. Lilly, one of the administrative staff of the Alexandria School of Theology - our college in Egypt, lost two relatives in the December 11 bombing, one a very close cousin. In such a situation of mourning, is it appropriate to celebrate such a joyful feast as Christmas? Should we postpone Christmas?
Of course the answer has to be no - precisely because Christmas is not simply a celebration, not simply a joyful feast. Christmas is about joy in the midst of sorrow, light coming into the very darkness of this world. The event of the Cairo bombing reminds us that not all was joy on the first Christmas. Of course we remember that the angels explained to the shepherds that the event happening in Bethlehem would bring joy. But this is not the kind of joy which simply ignores the pain of the world, or pretends it isn’t there. Jesus was born to a poor family, in a country occupied by a violent foreign power. When Jesus was born the local puppet king attempted to murder him by murdering all the baby boys in Bethlehem. The first Christmas was a time of deep sorrow for those living through the events. Interestingly, Jesus’ parents decided that fleeing to Egypt was the best way to avoid Herod’s brutality. Egypt was the place of refuge for the Holy Family. It still is. Jesus is still welcome in Egypt ... even if not by all.
One advantage of being our diocese (Egypt with North Africa and the Horn of Africa) is that we get to celebrate Christmas twice! Some, like the English congregations in Cairo and Addis Ababa an the Nuer churches in Gambella, celebrate on December 25. Others, like the Arabic churches in Egypt and the Anuak churches in Gambella celebrate at the same time as the Orthodox in early January. As bishop I get to do both! A double dose of the reminder that “the light shines in the darkness and the darkness has not [and cannot] overcome it.” (John 1).

We thank God for 57 recently confirmed in Teirgol, our outermost region in Gambella. Tiergol is accessible only by an (uncomfortable) boat journey, highlighted by passing tens of thousands of antelope and water fowl (as well as many crocodile). The women of Tiergol endeared themselves to Bishop Grant when they broke into spontaneous cheering at the amazing sight of a man (Grant) actually doing his own laundry!


Car Appeal
We have a 22-year old Land Cruiser. It’s great. It works ... but it is beginning to show signs that it won’t live forever. The heat and the rough roads of Gambella take their toll. We’ve had a car fund with SAMS, our mission agency for a couple of years and a number of people have given generously - but a good second hand, but somewhat younger, vehicle costs a lot of cash in Ethiopia where the import duty on cars is huge.
Then, out of the blue a couple of old friends, fellow former Montrealers, have decided to support our car appeal in a big way. They have decided that they will donate two Canadian dollars for every one US or Canadian dollar donated to our car fund for the next few months to a personal limit of $10,000. SAMS will inform them every month so that they can keep up their part of the giving.
Of course we are delighted and amazed. No matter how many times God surprises us like this we are still, well ... surprised! Please help us to raise the funds needed for a new(er) vehicle!
Our friends finished their email to us with a reference to Philippians 4:6-7:
“Do not be anxious about anything, but in everything, by prayer and supplication with thanksgiving, let your requests be made know to God, and the peace of God which passes all understanding will keep you hearts and minds in Christ Jesus.”
Amen to that.
+Grant
Posted by Bishop Grant and Doctor Wendy at 12:43 AM