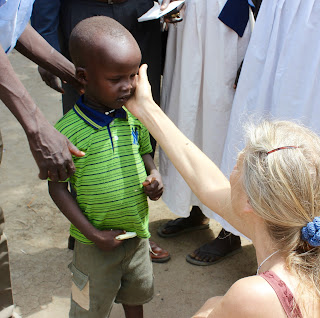 Many years ago I had a discussion with African theological students. “Western medicine shows how you get malaria,” I was saying. “Yes," one replied, "but it does not tell you who sent the mosquito!” Together we were exploring worldview and how it shapes our view of health and disease; how it shapes both what we do for healing and how we pray for it. It was fascinating to see how our cultural insights into these issues reflected biblical principles.

In general, the Africans tended to view disease as resulting from a disruption or a break in relationship. Traditionally, to seek healing, one went to a witch doctor who would do something to restore relationship. Healing, restoration of relationship, was costly. Therefore healing usually involved the sacrifice of an animal - a transaction that is both costly and binding. (Africans understand covenant). There was a shared belief, that although the spiritual realm was well populated with many entities (including the ancestors), there was only one God. They believed this God to be so far away as to be unreachable. Therefore sacrifice would be made to the ancestors, or to other spiritual beings, as they were considered to be closer to the one God, and perhaps able to move His heart in their favour. When they learnt that God Himself had opened the door to restored relationship, providing the costly sacrifice of His own Son, then they said, “Now we can open our hearts to God. He has provided the Way.”
The traditional western medical view of health and disease is also resonant with principles set forth in Genesis: we were to “have dominion” [Gen 1:26]; we were to “tend the garden"[Gen 2:15]. We were to take charge of and to take care of creation. As a medical student, I remember disease being described as a disruption of, or a disorder in the normal functioning of the body. At that time, the focus of healing was restoration of normal function. To study and to wisely use creation was foundational to traditional medical practice.

I have found there to be a depth of hunger to learn about and to put into practice the full scope of healing ministry - from community outreach through health teaching, to healing prayer for physical, inner and generational healing, deliverance and freedom from curses, to how to start a healing ministry in the local church. My sense is that teaching on healing has all too often been fragmentary, confusing, and in a way, passive. Healing prayer and health interventions have been perceived merely as things to be received rather than also to be given. There is a quality of joy when African saints are “equipped for ministry”, and it is a privilege to be a part of it.
Wendy

Notes on the Horn of Africa
Over the last five years of newsletter we have spent most of our ink telling stories of Gambella - and especially in the Anglican churches there. With good reason - when we came there were fifty Anglican churches in the region; now there are one hundred and twenty-five including our Assosa region. We have conservative estimates of 15,000 worshipers on Sunday mornings. The church cuts across ethnic divides: although most churches have one language group worshiping together on Sunday mornings, a good number have several language groups meeting together to pray and learn.
But the Anglican church in the Horn of Africa is not just Gambella. St Matthew’s Church in Addis, founded as a chaplaincy church for British ex-pats has been around since the 1920s. St Matthew’s in Addis continues to hold services in English - but not just for Brits - congregants come from every corner of the world these days and on most Sundays at the two English services there will 20 first languages represented. At the beginning of May a very joyful confirmation service saw young people and adults confirming their faith in Jesus.

But St Matthew’s has become a home for other Anglicans as well. On Sunday afternoon a group of Nuer and Dinka Anglicans are worshiping together - a miracle given that Nuer and Dinka are killing each other in South Sudan. At the end of May this ‘Nilotic’ congregation will have its own confirmation service. Once a month a group of ‘Equatorians’ - South Sudanese from the southernmost part of the country - gather for fellowship. They use some English and some ‘Juba Arabic’ as there languages are many (Bari, More, Zande). And in a classroom in another part of the compound a small fellowship of Amharic believers is now meeting on Sunday mornings while the English congregation uses the church. Meanwhile, in another part of the city, Christ for All Nations Anglican Church, also known as the Saris Centre, is the home for a small Somali congregation.
Outside of Addis one of our clergy has recently travelled to Bahir Dar near Lake Tana to help found and organise a student-led church in that town. Most of the members are Gambellans, but there are students there from many countries studying in English. In another town near the city of Ambo an independent Oromo congregation has been meeting for some time. The pastor would like the congregation to be less ‘independent’ - to be related to a wider body of believers. So we are meeting and going slowly to see if perhaps the Anglican Church might be the right place for them. We have hopes that other Oromo congregations might emerge near the Kenyan border with the help of the Diocese of Marsabit in Kenya.
Pray for these developments and for other possibilities developing in Djibouti and Somaliland. Pray for St George’s Church (called All Souls’ at first) in Asmara Eritrea, started in 1941. St George’s continues to function in an extremely difficult and confusing situation. And please pray for Egypt and for North Africa. May the light of God's love shine.
+Grant

Posted by Bishop Grant and Doctor Wendy at 11:34 AM 20 comments: