Joy...
Roller-coaster!
The thought sprung unbidden to mind as we turned off the main road and deliberately nose-dived into the ditch. Just how deep the ditch was, was hidden by the tall grass. I was reassured by the encouraging smiles and waving hands of our guides, mostly hidden in the head-high grass, as they directed us away from the thorny acacia bushes, and in between fields of maize, towards Nininyang’s new church - the roof just visible in the distance. We had arrived!! We were to spend the night resting and preparing for tomorrow’s service - the dedication of the new church! We had plans, after leading an impromptu welcome service, for a quiet night in our tent, in the church. The congregation had other plans. We could not possibly really want to be left alone - they could all spend the night with us!!! Party time!!! We can cook tomorrow’s feast, shout, laugh, sing (of course AT the top of our lungs), and beat the drum enthusiastically with ALL our might!! We emerged from our tent in the pre-dawn dark in some haste when the noise reached a new crescendo. "Were they calling us to get up?" we wondered. Peter Kuel, priest in charge of Nininyang mission centre, met us with his gentle smile, “Why are you up so early?” No matter, we could sit with the ladies as they prepared the feast on the ground in front of the church. I never realized just how grey cow intestines were, but perhaps they had blanched under the doleful eye of the cow's head, sitting together with the tail, seeming to observe all the preparations with less than an enthusiastic air. A feast of Kop (mixed maize and wheat flour) was prepared by two delightful but unfortunately incessantly coughing ladies. Too late we learned that it was mixed with unboiled water, much to our later intestinal regret. The dedication service was a mixture of joy and sorrow. Merle raiders had attacked the village next to us, killing some, kidnapping others. Peter Kuel’s niece was one of the children killed. A dear lady who had walked from a nearby village bringing with her the gift of a goat, was prevented from attending the service. She arrested that morning on the charge of having, by witchcraft, killed someone who had been bitten by a snake. Peter and a member of the congregation who was a policeman obtained temporary release for her, pending trial the next day. We prayed with her. “It is impossible! She is a Christian!” declared Peter. We all gathered round and prayed. It was clergy training days as we returned home from Nininyang. I’ll let Grant tell of this. ...And Sorrow Every month the clergy of the Gambella region in western Ethiopia come for two to three days of training. We are reading through 1 Corinthians, reading a book on the 39 Articles of Religion, and talking about pastoral issues in the area. At a recent gathering one of the clergy came to me during a break. “Bishop, I have a problem. I need help to understand something”. David Onuk is the priest for the Opo people a small language group two hours into the bush from Gambella town. Although the Ethiopian census number only 1,700, there are probably closer to 5,000 Opo people in the world (it is hard to count people who are so isolated). In the last few years many of them have become (Anglican) Christians. David’s problem took me by surprise, so I brought the story to the assembled clergy to discuss. A 19-year old nephew, James, who lived with David and his family, had gone off with a group of other young men to hunt for honey in the forest. They found a nest in a tree and James climbed the tree to retrieve the honey. The bees attacked and James fell from the tree impaling himself in the chest as he landed. By the time David reached the scene James was dead. Then David explained his dilemma. James is the first Opo Christian who has ever died. Some of the people are confused. Are Christians supposed to die? What happens to a Christian when he dies? David explained that the Opo have no view of an afterlife (at this point Grant the pastor was supplanted by Grant the student of African religion: really? I’ve never heard of a group of Africans with no view of an afterlife? Almost all Africans have some way of understanding the ancestors and their continued , usually shadowy, existence after death). After relating the details of the story, and after receiving comfort and assurances of prayers from the other pastors, we turned to an attempt to help David to communicate the meaning of this event to his people. The passage which, in the end, seemed most helpful was 1 Thessalonians 4:13-18, but especially the first two verses: "We do not want you to be uninformed brothers and sisters, about those who have fallen asleep, so that you may not grieve as those who have no hope. For, since we believe that Jesus died and rose again, even so through Jesus, God will bring with him those who have died." Paul, it seems, had encountered a problem in Thessalonica which was similar to the problem that the Opo were having. Didn’t Jesus defeat death? Doesn’t John 3:16 say that those who believe in Jesus “will not perish”? So what does it mean that Christians die? We talked for quite a while about that fact that Jesus himself faced death. We talked about the resurrection of Jesus and how Jesus’ resurrection is the “first fruits” of our future resurrection. We talked about how we do not have to grieve as if facing death means facing total loss and emptiness, but how our grief is intermingled with true hope - because Jesus rose, we have the assurance of being raised with him. James, even now, is truly in Christ.

~ For the preparation for the Mothers' Union project as each Mission Centre community is visited, and as each community elects its project representative
~ For ongoing ministry in Addis among Christians from a nearby country
~ For the peace of the countries of this area of the world.
~ For water for the Gambella Anglican Centre (more than 3 months without running water, the water tank rusted and now broken beyond repair)
~ Thanksgiving for the life of deacon Ayano Chule, and for his ministry to religious leaders living with HIV/AIDs who passed away July 2013 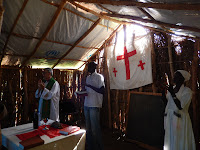 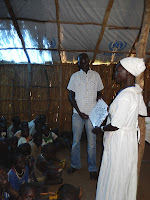 Posted by Bishop Grant and Doctor Wendy at 8:47 AM