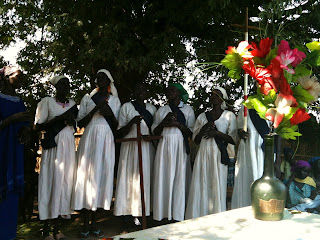 Of Cows and Considerations...

Once upon a time there was a man who had 10 cows and 100 children.
All his children needed cows.
“Give me a cow so I can feed my many children”, said one.
“Give me, for I am your newest child and I have nothing”.
Another said - “Give me a cow for I have lost my house and crops to flooding”
“My friends are leaving me for others who are richer”, said another.
There were school fees, hospital bills, repairs;  - many needs. Few cows.
What to do?
The man thought.
I could take all my cows and prepare a big feast for my children - but they would be hungry again tomorrow.
If I say “yes” to one, then I must say “no” to another, for there is not enough to go around.
Then he had an idea!
Instead of taking from the cows, his children could give to them.
Some had grass they could give. One had wood, another had rope- they could build an enclosure to protect them at night.
Some had knowledge of how to help the sick and the weak ones.
Some could be with them to watch over them.
At first his children were unhappy.
But little as they had, they gave what they could, and the herd began to grow.
The cows became healthy and sleek. Their milk was good and nourishing.
Before long, their cows became the ones that everyone wanted to buy.
They kept some and sold some, and the herd kept increasing.
Now I can be in peace, thought the old man - if my children learn how to give what little they can, and to share what they have, and to take care of what they have, then there will always be enough.

This parable came to mind as we prayed for wisdom in the sweltering heat of the night in Niniyang. “We are poor and powerless - You must give to us a church building, a clinic, a preschool, teachers, supplies. Then we will be a church that will attract people.”
“What are your strengths? Your gifts? Your ministries?”, we ask. “We need money - then our ministry will be to have a church that can give education, health care and worship,” was the reply. How to bless and empower without discouragement and without continuing to foster an unhealthy dependency? How to build a fully African church in its support, propagation, liturgy and government?

The Confirmation service the next morning was held under a tree - the church had been destroyed by recent flooding (not the only one to have been lost to the floods in Gambella this rainy season). Grant preached on Matthew 28:16-20, the so-called Great Commission: a story about eleven disciples, some of them doubting, sent to change the world.  They had no church buildings (or clinics, or schools) - nothing but the power and the Presence of Jesus - with them always: the same Jesus who had died on the cross at the hands of the religious and political authorities of his day, now claims to have all authority. Grant then laid hands on about forty Confirmands (most of them named Martha, it seemed) and commissioned them to go into the world with the message of God’s love in the power of the Spirit.

The first weeks in Gambella have been intense. After a beautiful service of Installation in Addis, with Ethiopian church leaders, international visitors and members of the diplomatic community as witnesses, we then headed to Part II. At the Gambella Installation there were a few more religious and political leaders - but mostly members of the churches from all around the Gambella region - some had travelled for two days to get there. Grant spoke to them about his hopes for this Diocesan Area - that they would be self-expanding (well, they do this already), self-governing (their next bishop should be an African!), self-supporting (they need to move away on depending on outsiders for everything) and self-theologizing (they need to be able to discern God’s will for God’s mission in this place). Not everyone liked these ideas, Grant soon discovered - especially the self-governing part: a small ethnic group worried that this would mean that the next bishop would be from a different ethnic group. Their fears may or may not be well-founded, but they are fears nonetheless. So they must be taken seriously - but they must also be healed by the perfect love of Jesus who casts out all fear. The self-supporting bit, well it just seemed to them to be impossible.

In the meantime, we will continue with the self-expanding part (they can plant churches, these folks), and begin work on the self-theologizing - every month when they come to be paid, they will receive two days of theological education, something they have had little of, but which they yearn for. 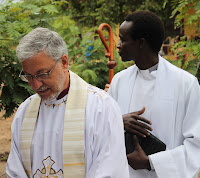 Posted by Bishop Grant and Doctor Wendy at 1:47 AM